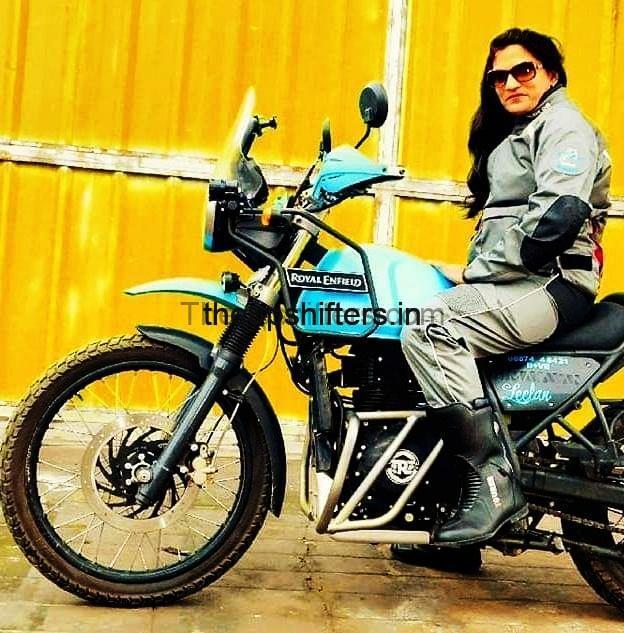 An architect by profession, rider by passion, a caring wife and a loving mother of an engineer son. As a motorcyclist I have clocked over 64000 kms in 2.5 years of active riding.

My association with riding began when

I had to visit various outskirts of the city for professional site visits. On one such ride, in 2010, I met a passionate rider Anil Gautam sir of Saahas Group & in conversation with him the seed was sowed in my mind to ride like him to distant places. In 2011, when my son went for higher studies to NIT-Karnataka, I was free from household responsibilities & so decided to turn to motorcycling as a creative pursuit.

A turning point came  when i rode 2600 kms in 6 days, solo on a Gujarat & Rajasthan tour on my Honda Unicorn Dazzler motorcycle. After that there was a short break. However, once again when my son was going abroad for further studies, we mother & son decided to spend some quality time together. We planned a ride to Kutch in Gujarat. In 2016, I decided to buy a Royal Enfield because somewhere in my mind was the deeply rooted the plan to ride from east to west on a bike ( just like Anil Gautam sir did).

Initially the plan was to ride solo, however a few girls joined in & it was a record feat of ‘First all female group to ride east to west’.
After thth ride, there was no looking back – the rest is, as they say history!

My previous rides were

& now Royal Enfield Himalayan 2018 till date. Along with that, I own an old classic – Yezdi Classic 250. I am also a proud member of Rajasthan’s oldest club – Rajasthan Jawa Yezdi Club, popularly known as RJYC.

My next bike is a Jawa 42 which i am expecting to be delivered this month, by March 2019

In 2 years, I completed 52000 kms & taking it to the next level I decided to upgrade to the Royal Enfield Himalayan as owing to its sporty look. From my early days, I have a mind set of always doing something different than what other females do.
Not many girls, rather say, ladies ride such a muscular bike, & so thought of Himalayan which I purchased in August 2018.

The number of kilometres clocked so far –

My most memorable rides

On the common belief that himalayan is too high I completely disagree. Though it looks high the seat level is the lowest compared to all other Royal Enfield bikes. The sitting posture is such that it becomes very easy to handle on it rough roads too.

The only drawback with this bike is its weight. All of 192 kilograms dry weight is a lot to handle. However, as compared to Classic or Thunderbird, this bike is more easy to handle.

Be prepared for average monthly visit to service centre. If you maintain your bike regularly. No chance that your Himalayan will give you any problem. Do not neglect any minor sound or any things that seems unusual.