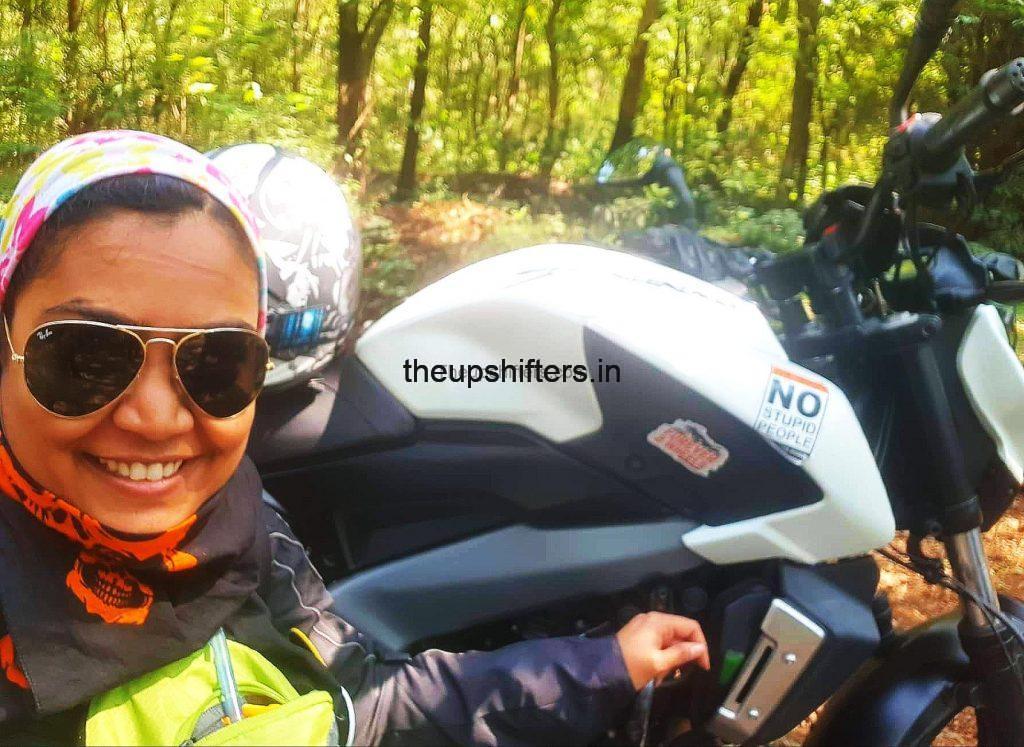 An IT Professional. I have been riding two wheelers for almost 20 years now. I started Pro-riding, with my 2017 Bajaj Dominar 400 in March 2017 because I love to travel and so far have traveled most of India. I am also a budding writer.

My association with riding began when ..

My mother was a motorist. She used to carry me and my siblings on her Bajaj M80 and we used to travel around the city of Kolhapur. I had learned riding a two wheeler from her. My first bike was father’s  Hero Honda CD 100 SS, then the Hero Honda Splendor.

My previous rides were –

I had bought my first bike sixth months before my first job. It was a gift from my father as I had got a job through Campus Selection. It was Apache 150 – the first Apache by TVS Motor. That time I got the nickname of  ‘The Apache gal‘. I had even started a blog by that name. Later I modified this bike for Off-roading. I am a One Bike Woman. It was Apache 150 – ‘Black  Pearl’ – always.

I was thinking of the 2017 KTM Duke 390 and the Royal Enfield Himalayan. Duke was really good when it comes to handling. However, Himalayan was a totally different game. It had power and stability. But Dominar was the one because it had a balance of both. One test ride and I was hooked, I booked Dom the next day.

I chose my current bike because –

The 2017 Bajaj Dominar 400 is all about 373cc of raw power. Plus its handling is really awesome. I don’t feel the weight when I ride it. While cornering, the side stand of my bike easily touches the road. That’s the best aspect of this bike. The design of Dominar is to die for. Not a single journey of mine is complete without people giving it a second look.

The number of kilometers clocked so far –

because
The seat is not proper for girls as the height of bike is designed keeping men in mind. Bajaj should provide means to adjust height of the bike as per needs of the rider like providing extra setting for Mono suspension. No other reason for girls not to have this bike, After all why should only boys Go Hyperriding!
CategoryStiletto Shifter
TagsBajaj Dominar 400 Bajaj Dominar 400 Review