OnePlus comes on board as Title Sponsor of X1 Racing eSports Season 1, to kickstart in Mumbai on October 10, to take place across six cities

The X1 Racing League; a concept started by Indian racers Armaan Ebrahim and Aditya Patel will hit circuits on November 30-December 1 in New Delhi and December 7-8 in Chennai. The league announced its six team owners and will be powered by JK Tyres Motorsport.

“We are excited to partner with extremely passionate team owners who have a long-term vision to develop and build motorsports in India. We thank JK Tyre for believing in us and coming on board as our Powered-By sponsor. Personally, for Aditya and me, this is completing a full circle with them, and we thank Sanjay Sharma for his enthusiastic support. We are excited to partner with OnePlus – they are a global leader and have made pioneering advancements in technology. With them as a Title Sponsor for X1 Racing eSports Season 1, we are aiming to set the gold standard for the ecosystem in India and make motorsport accessible to all. It is a huge opportunity for aspiring racers from India to make their mark and all eyes from the racing community will be on the league thereafter,” said Armaan Ebrahim at a press conference held in Mumbai.

“We at JK Tyre have been nurturing and honing talents in the country for almost over three decades now and seeing our boys Armaan and Aditya who started their motorsport careers with us come up with this concept is so heartwarming. We are happy to be associated with X1 Racing League which is an interesting new format that brings international motorsport talent to interact with Indian talent in this composition. It will appeal to a larger fan base and with the addition of the eSports league, will make the sport more accessible.” said Mr. Sanjay Sharma, Head-Motorsport, JK Tyre.

The international male racers include:

The international female drivers are

The X1 Racing League teams will be representing six cities.

Adding to the innovation in the Indian realm of motorsports, OnePlus, the global technology brand, has joined hands with X1 Racing team as the Title Sponsors to launch the X1 Racing eSports Season 1, a digital simulator-based racing competition with a prize pool of Rs.1.5 crore.

The first-of-its-kind eSports initiative in India will be organized between October 10, 2019 and November 17, 2019 across all franchise cities. 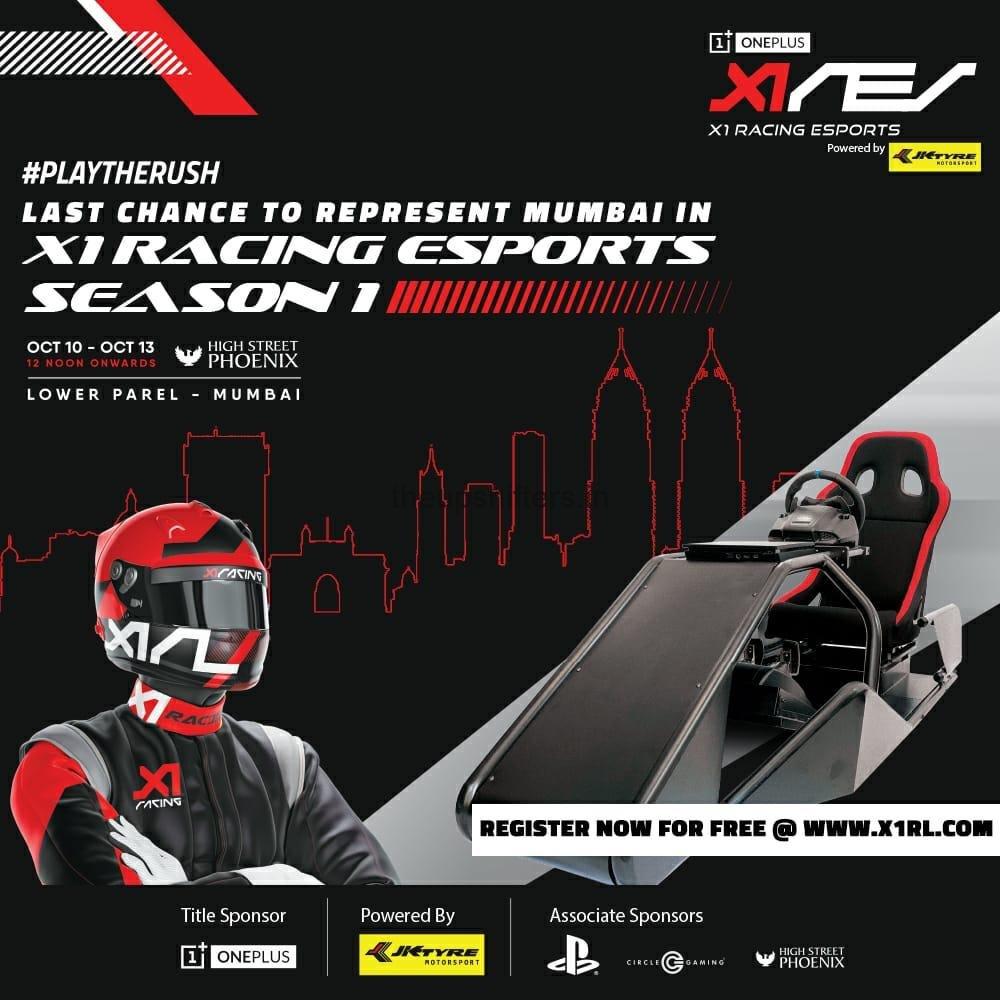 The eSports competition will happen at:

Further addressing the eSports initiative, Vikas Agarwal, General Manager, OnePlus India, shared, “We are thrilled to be collaborating with X1 Racing eSports Season 1 in this one-of-a-kind gaming initiative. OnePlus has been one of the pioneering technology brands to invest in the gaming space and develop gaming-friendly features for its users globally. We believe that there is a plethora of remarkable, yet unexplored ideas for gaming enthusiasts in India. And with launching X1 eSports initiative, we would be a step closer to unravelling these exciting, new opportunities in the gaming space.”

Ravi Krishnan, Non-executive Chairman X1 Racing feels that India is potentially a big market for motorsports if curated in the right format. He said, “X1 is creating, developing and commercializing a unique ecosystem for motorsports via 3 pillars – League, eSports and Speed Summit – to create a community that includes the avid motorsports fan, the general sports and automobile enthusiast, the youth of the nation, aspiring racers and previously untapped consumers.”

Mohit Burman, Vice Chairman of Dabur India and investor in X1 Racing, said, “I am excited to back the young and dynamic X1 Racing founders. We are redefining and reinventing motorsports, and this is poised to be a pioneering endeavor.”

X1 Racing, promoted by Racing Promotions Private Limited, is a hybrid motorsport media business creating, developing and commercializing IPs via live events, experiences and ecosystem. X1 Racing intends to reimagine, reinvent and redefine motorsport. X1 Racing is built on three pillars namely X1 Racing League, X1 Racing eSports and X1 Racing Speed Summits. The X1 Racing League powered by JK Tyre takes place in November-December in Delhi and Chennai represented by six franchise teams of 24 race drivers including international and domestic men & women. The X1 Racing eSports Season 1 is being held in collaboration with global technology leader OnePlus across each of these six cities prior to the professional league to involve fans in a participative simulator-racing format. Winners will win rewards as well as have an opportunity to be trained by professional race drivers.

Additionally, in their attempt to make motorsport a part of a larger lifestyle, the X1 Racing Speed Summits will bring about exclusive weekenders in the form of VIP corporate experiences. All these pillars bring together a robust calendar of motorsport activity across India touching fans and talent alike to truly make motorsport much more than a sport, but a lifestyle.

Humara Bajaj – The legendary Chetak is back!